“Our Stories Are Powerful”: The Use of Youth Storytelling in Policy Advocacy to Combat the School-to-Prison Pipeline

FLDC member Mark Warren, along with Jeffrey S. Moyer and Andrew R. King, are the authors of, “‘Our Stories Are Powerful’: The Use of Youth Storytelling in Policy Advocacy to Combat the School-to-Prison Pipeline” in the Summer 2020 Harvard Educational Review.

Abstract: The use of narratives and storytelling has become an increasingly common strategy in grassroots organizing and advocacy efforts to influence policy change. Drawing on qualitative interviews and observations, Jeffrey Moyer, Mark Warren, and Andrew King present a case study of the successful campaign by Voices of Youth in Chicago Education (VOYCE) to pass SB100, a progressive Illinois law aimed at ending the school-to-prison pipeline. The authors show that personal storytelling, when combined with other approaches, constitutes an effective strategy for youth organizing groups in low-income communities of color to achieve racial equity and educational justice policy goals. In this case, youth leaders involved in VOYCE told legislators their personal stories of the harm done to them and their friends by zero-tolerance school discipline and spoke to the racial inequities they faced. In doing so, they countered previously held narratives of youth of color as troublemakers and violence-prone and created a moral urgency for legislators to act. Youth leaders used storytelling and data to build a larger alliance of supporters, which contributed to the passage of a bill that limited harsh discipline, promoted restorative justice alternatives, and took steps to close racial gaps in suspensions and expulsions. 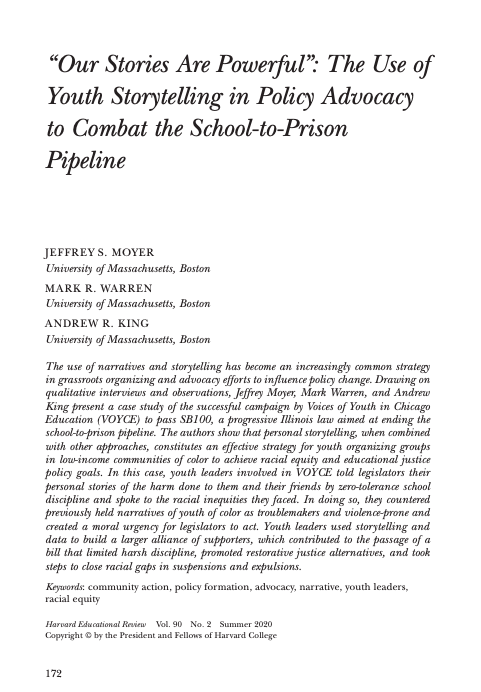