Hundreds of parents in Los Angeles Unified School District (LAUSD) shared their stories of experiencing negative interactions with teachers and administrators in schools, often times feeling disregarded and marginalized due to racial stereotypes and anti-Black and Latino racism, particularly when they pushed back on the ways in which their children were being disciplined. Historically, these institutionalized disciplinary policies have disproportionately targeted and unfairly criminalized Black and Latino youth, thus structuring a “school-to-prison” pipeline. In response, Community Asset Development Re-defining Education (CADRE) parent leaders campaigned to push LAUSD to eliminate race-based discipline policies and practices and disrupt the school-to-prison train. Although CADRE has been successful in passing school discipline policies that systemically address racial disparities, the fundamental relationships and interactions between parents/families and teachers in schools require transformation in order to effectively disrupt the school-to-prison pipeline.

With the intention of reimagining parent-teacher conversations and interactions, CADRE parent leaders participated in a series of design circles where they engaged in role-playing and collective reflection to humanize conversations and disrupt entrenched power dynamics that policy alone could not achieve. Role-playing in this context entailed parents assuming roles as teachers and as themselves, acting out scenarios drawn from lived experiences they have had with educators in school settings. Role-playing lends itself to individual and collective reflection and requires coming to terms with one’s own resistance to each other, one’s own resistance to tension, or one’s own resistance to being open to change. Role-plays hold much promise for rethinking and transforming parent-teacher conversations, serving as an effective strategy to humanize parents’ demands and refine the message around them. 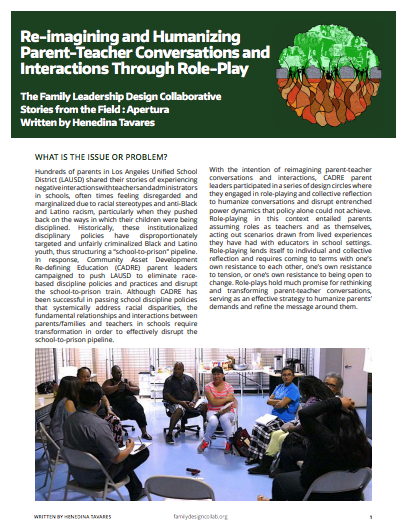